Digital Participation. The case of the Italian “Dialogue with Citizens”. 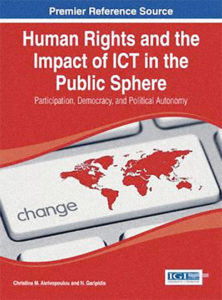 Quoting: G. SGUEO, “Digital Participation. The case of the Italian “Dialogue with Citizens” in Human Rights and the Impact of ICT in the Public Sphere, IGI Press, 2014

This chapter focuses on the initiative named “Dialogue with Citizens” that the Italian Government introduced in 2012. The Dialogue was an entirely Web-based experiment of participatory democracy aimed at, first, informing citizens through documents and in-depth analysis and, second, designed for answering their questions and requests. During the year-and-half life of the initiative, roughly 90,000 people wrote. Additionally, almost 200,000 participated in a number of public online consultations that the government launched in concomitance with the adoption of crucial decisions (i.e. the spending review national program). From the analysis of this experiment of participatory democracy three questions can be raised: (1) How can a public institution maximize the profits of participation and minimize its costs? (2) How can piblic administrations manage the (growing) expectation of the citizens once they become accustomed to participation? (3) Is online participatory democracy going to develop further, and why?